BRIDGE OF SIGHS AND DREAMS

Posted on September 21, 2015 by pamelaallegretto 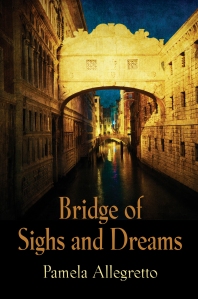 Nazi-occupied Rome sets the stage for Bridge of Sighs and Dreams, where the lives of two women collide in an arena of deception, greed, and sacrifice.
Following an allied attack, Angelina Rosini flees to Rome from her bombed-out village and a ruthless Nazi officer bent on revenge. In Rome, the spirited portrait artist channels her creativity into the art of survival for herself and her young daughter. Unwilling to merely endure, and armed with ingenuity, wit, and unyielding optimism, she enters the shadow world of the Resistance where she zigzags through a labyrinth of compassionate allies and cunning spies.

Meanwhile, Lidia Corsini quenches her lust for power and wealth by turning in Jews to the Nazi Police attaché with whom she has formed an alliance. Her spiral into immorality accelerates as swiftly as the Jewish population dwindles, and soon neither her husband nor her son is immune to her madness.

Once Angelina discovers the consequences of Lidia’s greed, she conspires to put an end to the treacheries; but in doing so, she becomes the target of Lidia’s most sinister plot.

Bridge of Sighs and Dreams is a story of betrayal, dignity, and purpose that highlights the brutality toward Italian citizens, under both Mussolini’s Fascist regime and the Nazi occupation, and illustrates the tenacity of the human spirit.